Chicken Fingers: A Note from Our Executive Director 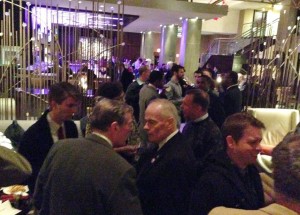 We set up at the bar at the convention’s host hotel, set out a couple of plates of chicken fingers, and then something amazing happened: people started talking.

RNC members from Texas, North Dakota, Maine, Tennessee, Montana, Illinois, and Delaware came by to meet Log Cabin Republicans members. The Chairman of the National Young Republicans stopped in, as well as the Chairwoman of the College National Republicans and reps from major conservative think tanks. Among all, the message was clear: there is more that unites us than divides us.

Not all advocacy happens behind a podium, or in front of a microphone — a lot of the work that Log Cabin Republicans does happens behind the scenes, at events like this. Incidentally, I don’t think it’s a coincidence that the following morning RNC Chairman Reince Priebus called on anti-gay RNC Committeeman Dave Agema to resign. That moment marked an historic shift that would not be possible without the work of Log Cabin Republicans.

We are the only national Republican gay advocacy organization in Washington. Without Log Cabin Republicans fighting in our nation’s capital and through local LCR Chapters across the country, there would be no progress.

And we fight like hell. Just yesterday, in the wake of Committeeman Agema’s refusal to step down, I personally challenged him to a debate: conservative-to-conservative. If Log Cabin Republicans isn’t there to push back against bigotry and fight for a bigger tent, no one else will.

That’s why your financial support is so important. The fight for equality in the GOP is happening now, and we need all the resources we can get to keep the pressure on our opponents.

Please give to Log Cabin Republicans today, and give generously. Your donation of $50, $100, $200 or more today will make sure we can push back against the Dave Agemas of the party and battle for victory in November.

Let’s keep those plates of chicken fingers coming. Let’s keep the conversations going. And let’s keep up the fight for equal rights for all Americans and a stronger, more inclusive GOP.