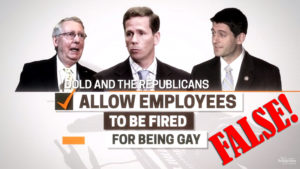 The ad, which can be seen at this link, falsely declares Dold believes businesses should “allow employees to be fired for being gay” — a brazen untruth in an advertisement ironically titled “Facts”.

“Democrat Brad Schneider and the DCCC are the lyingest bunch of liars who ever lied a lie,” Log Cabin Republicans President Gregory T. Angelo said. “It would be an amusing statement if it weren’t so true. Their despicable defamation of one of the strongest Republican allies of LGBT equality in congress shows there is no low too low for them to steep to in their desperately futile attempt to regain power in the House of Representatives. Contrary to what their ad would have you believe, Congressman Dold supports marriage equality, opposes employment discrimination for LGBT workers, and voted time and again to uphold the president’s executive order barring discrimination based on sexual orientation and gender identity in federal contracts. Log Cabin Republicans demands the DCCC cease airing this ad at once. Additionally, now that Hillary Clinton has finally become well enough to return to the campaign trail, she and her running mate Tim Kaine need to denounce this slander by Schneider and the DCCC unequivocally. If LGBT equality truly is a ‘nonpartisan issue,’ it’s time for Democrats to show it.”