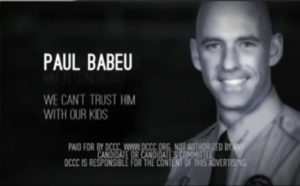 Washington, D.C. — Log Cabin Republicans is demanding in no uncertain terms that the Democratic Congressional Campaign Committee (DCCC) retract, apologize for, and cancel all pending airtime reservations for its sick smear ad against out gay Republican candidate for the United States House of Representatives Sheriff Paul Babeu.

The commercial references a thoroughly debunked claim that Babeu presided over a private school alleged to have mistreated students, with words like “sexual abuse” and “strip” flashing across the screen, culminating with the statement, “We can’t trust him with our kids”.

“Attack ads don’t get more homophobic than this,” Log Cabin Republicans President Gregory T. Angelo stated. “Not only is this commercial factually inaccurate, but it shows just how low the DCCC is willing to go to stop a gay Republican from being elected to Congress. Democrats love to say they support the LGBT community — unless you’re a gay Republican, in which case floating the specter of gays as child predators and deviants is fair game. Log Cabin Republicans demands that the DCCC apologize to Sheriff Babeu, apologize to the LGBT community, and cancel all pending airtime reserved for this thoroughly despicable advertisement.”